And So The Earl Grey Saga Continues .... 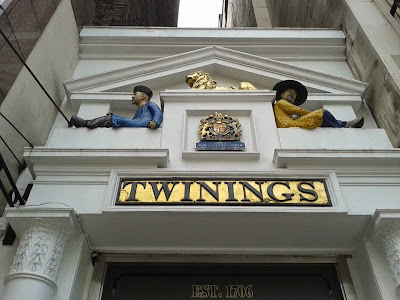 Yesterday I visited London for an appointment. Afterwards, being in the local area, decided to pop into two teashops. One, Twinings, the other Whittards at Covent Garden.

I was quite excited by the prospect of visiting Twinings - I hadn't done so in ages. I found some great tea's. Intensely Tropical one was one fabulous purchase. I also managed to get some of the Earl Grey Classic blend and one or two other ones I liked the look of. All will be reviewed on here in time.

As much as I enjoyed the visit, I felt it lacked the sparkle of previous visits. There was something different in the shop, it had changed. I think it was because there were less of the individual, unique tea's that they used to stock, instead rows and rows of tea that is available in most commercial supermarkets and shops filled the shelves.

In the shop I was chatting to the female sales assistant, who was really friendly and who knew her stuff. Then, I will admit, down to me, I raised the thorny issue of THE Earl Grey.

Readers may not be aware of the Earl Grey issue so I'll give you a run down.

About five (could be more!) years ago, Twinings changed the recipe of their Earl Grey. They changed the recipe, the packaging and the name, it's now called "The Earl Grey". This massive change caused such a do in the tea world. I was just stepping into the tea world around the time the change occurred and I was hugely surprised at the fuss and anger the changes incurred.

The Earl Grey was described by some of the readers of this blog, in emails to me, as 'weak as water', 'tasteless' and 'bland'. So, instead of buying "The" Earl Grey, readers admitted to me that they brought the international range, known as "Classic Earl Grey" (you'll know it, it's in a yellow box) from Twinings website. Yes, it was an expensive way of buying Earl Grey, but, it was tasty and flavoursome, and identical to the previous Earl Grey sold in the UK.

I happen to agree. So, it was with excitement that I headed to Twinings to stock up on the Classic range. But, to my horror (and surprise) it's not longer sold in bags, just in small caddies. Online the tea is only available in a decaff version.

So, it seems, Classic is being restricted, at least in the UK. I'm not sure if it's being phased out totally, or if it's just an availability issue. Either way, I was disappointed.

Upon chatting to the friendly shop assistant about the thorny issue of Earl Grey, I confided in her that I relied upon the Classic version as I didn't enjoy what I could get in the UK. She replied that they had acted in response to consumer feedback. I get that, brands are always asking customers to participate in surveys and market research to help keep them on top of their game. But what has gone terribly wrong?

The issue of Twinings Earl Grey is indeed the issue I receive most emails about. Some offering genuine ways to improve the tea, other's just wanting to rant to a sympathetic ear. So I have to question have they truly listened to their customers or did Twinings simply decide to modernise the recipe and the brand?

I hear again and again of people's lack of interest in Earl Grey. Many, myself included, have found wonderful Earl Grey's else where, quite often in loose form, that are fully flavoured and affordable in price. I have heard stories of  one reader who goes on holiday to America each year and stocks up on the classic range whilst out there.

On the other side of the arguement, of course, is that whatever supermarket I go in, Twinings Earl Grey is always at least half empty, so it does sell. Is it then a case that us tea obsessives (or lovers, if you prefer that term) are just simply too picky?

I don't believe we are. Earl Grey is a blend that is very hard to get right. Too weak it's awful, too high a amount of bergamot and flavours leaves it unpleasantly perfumed. But The Earl Grey is so pale in comparison that I often have to use two bags to get a decent brew.

There is ground though to keep everyone happy.

Please, Twinings, bring back the non-decaff International Classic Earl Grey. At least give us Earl Grey lovers the option of either buying Classic or the new The Earl Grey. If you are limiting the classic range I feel you are making a mistake as so many tea lovers rely on your little yellow box of Earl Grey to keep them happy.

I know times - and trends  - change. However, I feel with Earl Grey it's such a traditional tea that there is room for every kind you can imagine.

Tea Lover
Since 2010 I have been a tea obsessive, when I took my first sip of the famous Mulled Spice tea. Since then I have been on a absolutely fantastic tea adventure, where I've tasted some of the finest tea going, and have met some extraordinary people. Writing is also a passion. Through these two interests this blog was born. Nothing gives me greater pleasure then writing about the thing I love most - tea! My blogs are always honest - my aim is to bring honest reviews to other tea lovers, as well as the casual tea drinker, so they, too, can enjoy tea and all the wonders it brings. If you are interested in having one of your tea's feature on this blog then please don't hesitate to contact me on: laura.burley79@gmail.com I hope this blog not only provides you with interesting information but also gives you the inspiration to try all of the wonderful blends out there. Happy tea drinking everyone!